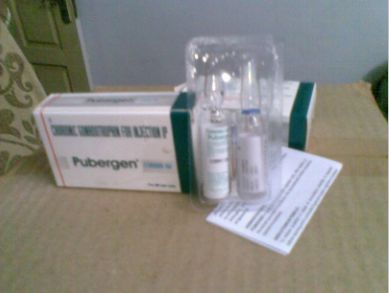 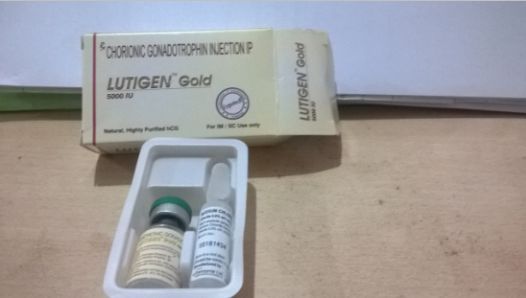 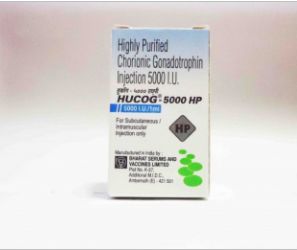 Storage/Stability/Compatibility : Chorionic gonadotropin powder for injection should be stored at room temperature (15-30°C) and protected from light. After reconstitution, the resultant solution is stable for 30-90 days (depending on the product) when stored at 2-15°C.
Pharmacology : HCG mimics quite closely the effects of luteinizing hormone (LH), but also has some FSH-like activity. In males, HCG can stimulate the differentiation of, and androgen production by, testicular interstitial (Leydig) cells. It may also stimulate testicular descent when no anatomical abnormality is present.
In females, HCG will stimulate the corpus luteum to produce progesterone, and can induce ovulation (possibly also in patients with cystic ovaries). In the bitch, HCG will induce estrogen secretion.
Pharmacokinetics : HCG is destroyed in the GI tract after oral administration, so it must be given parenterally. After IM injection, peak plasma levels occur in about 6 hours. HCG is distributed primarily to the ovaries in females and to the testes in males, but some may also be distributed to the proximal tubules in the renal cortex.

HENCE HCG DROPS AND HCG DIET ARE A SALES GIMMICK

HCG is eliminated from the blood in biphasic manner. The initial elimination half-life is about 11 hours and the terminal half-life is approximately 23 hours.
Contraindications/Precautions - In humans, HCG is contraindicated in patients with prostatic carcinoma or other androgen-dependent neoplasias, precocious puberty or having a previous hypersensitivity reaction to HCG. Antibody production to this hormone has been reported after repetitive use, resulting in diminished effect.
Adverse Effects/Warnings - Potentially, hypersensitivity reactions are possible with this agent. HCG may cause abortion in mares prior to the 35th day of pregnancy, perhaps due to increased estrogen levels. No other reported adverse reactions were noted. In humans, HCG has caused pain at the injection site, gynecomastia, headache, depression, irritability and edema.
Overdosage : No overdosage cases have been reported with HCG.
Drug Interactions : No interactions have apparently been reported with HCG.